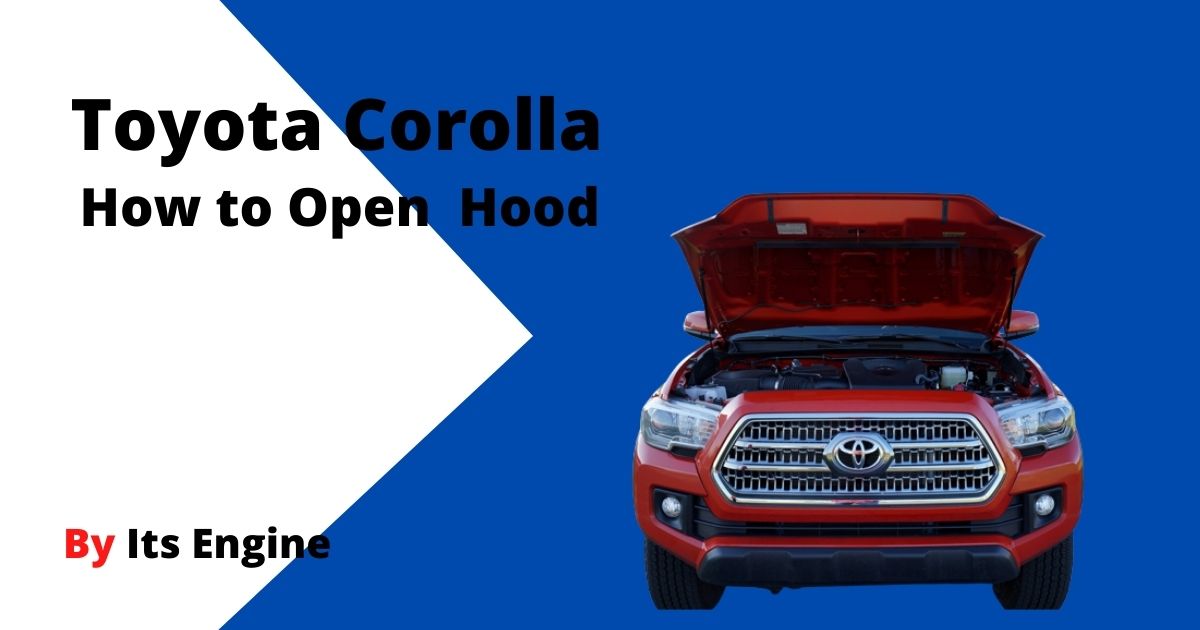 If you’re looking for a step-by-step guide on how to open Toyota Corolla hood, you’ve come to the right place. By reading this discussion, you’ll learn about the reasons why you might need to do so, as well as the precise steps needed to complete the task.

Knowing this is very important because, without having enough knowledge of these things, you may make mistakes and face damage to your car. So, let’s see how to do that. This process will be step by step process.

How to Open Toyota Corolla Hood?

There are different processes for the opening hood of Toyota Corolla car. People follow their own way to do this. But here is the easiest way to complete the opening hood of this model. This is a step-by-step process. I hope you will enjoy this reading.

You will see one of the latches stay under the steering wheel, on the left side. On this latch, you will see a small icon of a vehicle. Now you have to pull this latch outward until you hear the hood pop open.

Step 2: Go to the Front of Car and Lift Up the Hood

Now you have to go to the front side of the car and you will see that the hood pops up about an inch or so. Now you have to lift up the hood but before this, you will need to reach your one hand inside the crack and find the latch.

Step 3: Use the Rod to Prop the Hood Up

Now, you have to use the rod to prop the hood up. So, first, you find the prop rod on the left side of the engine bay. Then open this prop rod from the clip and set up the corresponding hole in the underside of the hood.

If you are having difficulty opening the hood latch of your Toyota Corolla, there is a very common solution. First of all, be sure that the hood latch is not stuck. If the latch is not working, you may need to clean the contacts or replace the internal component.

If the latch is stuck but the hood is still closed, try prying the hood open from the inside using a thin object like a pen. If that does not work, you may need to break the seal around the latch and pry it open from the outside.

Why Do You Need to Open Toyota Corolla Hood?

Opening the hood of your Toyota Corolla can help to keep your car running smoothly and efficiently. By doing this, you can access and service your engine, air filters, and other components. Additionally, you can clean them if necessary.

This is a common procedure for those who own Toyotas because they are known for their reliable engines. By keeping your car running smoothly, you will be able to avoid costly repairs down the road. Furthermore, by servicing your engine regularly, you will be able to optimize its performance and prolong its life.

If you do not open your Toyota Corolla hood regularly, dirt, dust, and other debris may build up and cause damage to your engine. In addition, this can lead to poor fuel economy and decreased performance. Therefore, it is important to take care of your car and open its hood regularly.

How do You Open a Toyota Corolla Hood Without the Release?

This is a difficult question to answer, as the hood release on a Toyota Corolla is designed to prevent accidental opening. While there are ways to open a Toyota Corolla hood without the release, it is not recommended as it can be dangerous and could lead to damage to the car.

However, typically, the hood release is located in the front of the car near the windshield. To open the hood, you will need to locate the release button and push it inwards. Once it is released, you can then raise the hood by pulling on the attached cord.

Hoods are a necessary part of any car, and Toyota models, in particular, are no exception. By understanding how to open the hood of your Toyota Corolla, you’ll be able to maintain and repair your vehicle more effectively.

In addition to this, by learning about the different models of Toyota cars, you’ll be better equipped to choose the right one for your needs. Keep reading our website for more information about this and other car models.